By Jason Vredenburg -
Updated April 29, 2022
Advertising Disclosure: The Performance Insiders is reader-supported. When you buy through links on our site, we may earn an affiliate commission. Learn more.
Reading Time: 5 minutes

An overview of male reproductive organs

It’s crucial to have some basic awareness of sex and reproductive organs of human beings. However, many people are still hesitant to talk about the issues associated with sex and sexual organs.

The study[1] has shown that the sex education has been emphasized a lot by the United States government recently, but there are still many people who are not knowledgeable about the basic things related to sex and reproductive organs.

The male reproductive system generally consists of organs that are important for:

How Does the Male Reproductive System Operate?

The pituitary gland is responsible for the production of LH and FSH hormones. FH assists in sperm production and LH assists in testosterone production. These hormones work together for continuing the process called spermatogenesis.

Talking about the hormone, testosterone, this hormone is crucial for the development of bone mass, male characteristics, muscle mass, and sex drive.

Internal Organs That are Associated With the Male Reproductive System

Let’s get to the meat of the thing now. Here are the internal organs that are associated with the male reproductive organs.

These glands are responsible for the production of a slippery fluid. The fluid that is produced by these glands is directly emptied into the urethra.

We will discuss these organs in detail in this section of this article:

The second external male reproductive organ is the scrotum. It is a loose pouch-like sac that hangs below the penis. The scrotum also contains the testicles. The scrotum plays the role of the protective organ. It protects the testes and controls the temperature of the testes, similar to the climate control system.

In order for the sperm to develop, the temperature of the testes must be a little bit cooler than the normal body temperature, and this is exactly what the scrotum does. 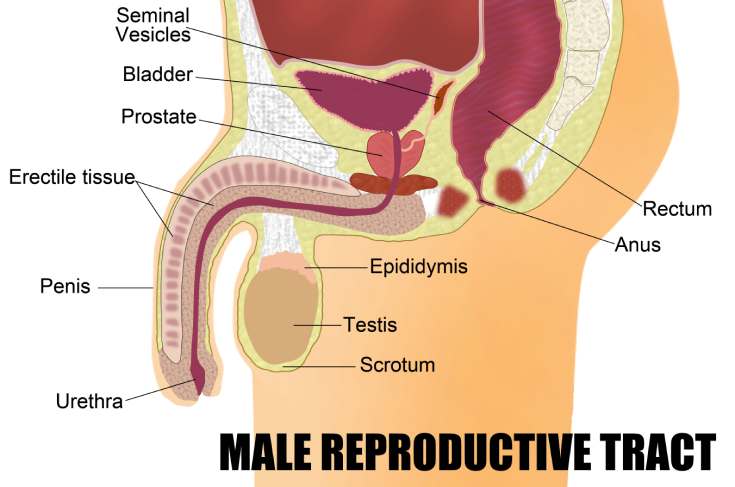 The testicles are oval in shape and these organs are found in the scrotum. Most of the men usually have two testicles, and these organs have the function to produce the testosterone, which is one of the most important male sexual hormones.

The seminiferous tubules are found within the testicles. These organs have the role to produce the sperm cells via a process known as spermatogenesis.

The final male external reproductive organ is the epididymis. The organ is found on the backside of the testicles. It carries the sperm cells that are produced in the testes. Furthermore, this organ is also responsible for bringing the sperm to maturity. When the sperm is produced, they are immature, which make them incapable of fertilization.

Read Next: What needs to be changed for Good Sexual & Reproductive Health?

The male anatomy must not only be understood by the male population, but it’s also equally important for the female population to understand their partner. According to the study[2], 6 out of 10 couples are not satisfied with their relationships, and one of the biggest reasons behind it is an unsatisfying sex life.

Understanding each other’s reproductive system can significantly improve your ability to satisfy your partner. Along with understanding each others system, you can also take the help of some male enhancement supplement such as Erecta to get more satisfaction in your sex life. And, a satisfying sexual intercourse means higher sexual frequency. I hope this article has helped you understand the complete male anatomy.